So much happened this Wednesday that we did not get to write at all.
Only today, already in Gonder, we can – and this only after 10 p. m. – continue writing (in German).

In the morning, we are having breakfast together with Lena fromTübingen. Her boyfriend, with whom she is traveling, has a nasty intestinal upset and stays in bed. She tells us what they have experienced so far – and then she sets off for the Blue Nile waterfall which breaks off the river about 40 kilometers away.

We, too, will be picked up for our trip, first to the waterfall. Some kms were on asphalt, then about 30 kms of unpaved road.
The driver calls it „african massage“, because you are
vigorously shaken.

In the small village Tis Abay we stop. To see the waterfall, you pay 150 Birr entrance fee per person and 300 again for the guide. Juju is a very good English
speaking guide and accompanies us on the longer way to the waterfall.

First it goes over a stone bridge, the „Portuguese bridge“, built by
missionaries. Again and again groups and individual farmers encounter us with packed donkeys who want to go to the market in Tis Abay.

It goes quite steeply upwards – but then we can first hear and then see the waterfall. A really impressive spectacle of nature! 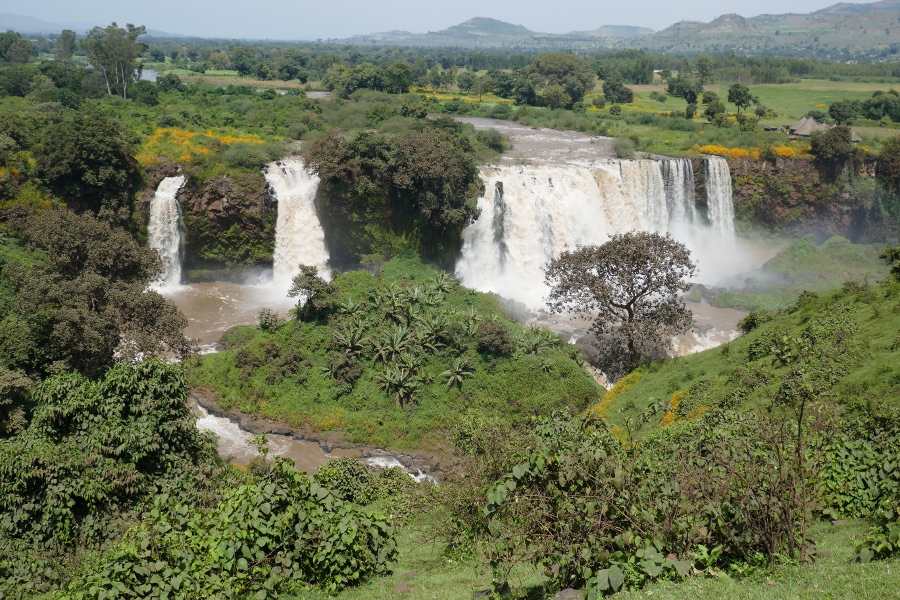 We walk in a wide arc around the falling water masses – over a
suspension bridge. And here, too, the Ethiopian peasants drive their
donkeys over it, although they are unwilling.

Just beyond the bridge is a small settlement – and here a musician plays the traditional violin. We let him play for us – and of course he gets money for it. Wendelin first gives him 20 Birr, but he has already discovered the
50 Birr note in his pocket – and says, well, 50 would be better.
Wendelin gives him the 50 Birr – spoiling the prices for today. Because the guide who has really done much more than the musician, wants to end
up with 200 Birr as a tip.
Anyway, we see the waterfall again from close up, before we cross the waters of
Blue Nile with a small boat above the Falls and are finally picked
up again after a hike along the river by our driver.

For lunch, we arranged again a meeting with the second tour operator in a pizzeria. It’s
about the price of a car with driver to Axum. We decided to use a private car, because that makes us much more flexible. But it is quite a haggling and calculation, before we decide for one of the providers.
Ultimately, the prices do not differ much and we hire Zelalem for the car. Not the best option – the car is ok, but the driver speaks much worse English than the driver, Gaschew, the other operator had organized for us.

After lunch, we start again, this time by boat to two
monasteries nearby. However, it is a good hour drive across the rather turbulent Lake Tana.

The monastery requires another guide (300 Birr) and the monasteries cost
150 Birr per person. We first visit the monastery Ura Kidane Meret. The
approximately 1.5 kilometers from the dock to the monastery entrance are
peppered with souvenir sellers – and we do not come out of the friendly
refusal with the formula „Ahme Seke Nahlu“ (thank you).
Annette finally buys a scarf out of silk, but haggling is difficult,
because once you start trading, you can not get out of the number again
and usually end up at about 60% – 70% of the originally mentioned price.
If the price seems too high, you should not begin to bargain. On the other hand, it makes no sense to
negotiate the last 10 Birr (30 Eurocents) out. The people finally live
on the sale.

The monasteries are impressive, especially the first, where the mass is
still in progress on the eve of the Meskal festival. The faithful people bow,
the Pope sings and we learn that the outer circular walk in the church is for sing and praying, the inner part is reserved for prayer only and the holy of holies may only be entered by the priests. This part also holds a copy of the Ark of the
Covenant with the 10 commandments.

The „Holy of Holies“ is surrounded by a wall of linen, which is painted
all over with Biblical – both Old and New Testament – scenes.

Earlier, the popes called with these „stone bells“ to prayer. They
actually sound a bit like a bell.
The Azuwa Maryam Monastery, a 5-minute boat ride away, differs only slightly.

In the evening a special experience awaits us: the ceremony and the bonfire for the Orthodox Meskal festival. There is a special site for it. About 10 000 believers from the city and the surrounding area, especially the women with gorgeous, mostly white holiday dresses, have gathered and follow the rituals on a stage where more than 100 priests and popes pray, sing and bless.

It is the feast of the „true cross“ and the retrieval of the cross of Jesus is celebrated. Everywhere in the cities, specially in this area, there are such big celebrations – but also countless smaller ones. And many of the people are really great to look at.

The feast culminates in a blazing fire that is greeted with rejoicing by all. We are in the midst of thousands of Ethiopians dancing and celebrating.