One last breakfast in the „The Annex“, run by the sister-in-law of a Dutch woman living in Switzerland. We also stuck the shower head, which jumped off the hose due to the water pressure. It is not easy to keep such accommodation not only clean, but also properly functioning.

At 10 o’clock we are ready to leave and go first to buy a hairbrush for Annette. But today is a holiday, everywhere in the streets is dancing and making music, many shops are closed. 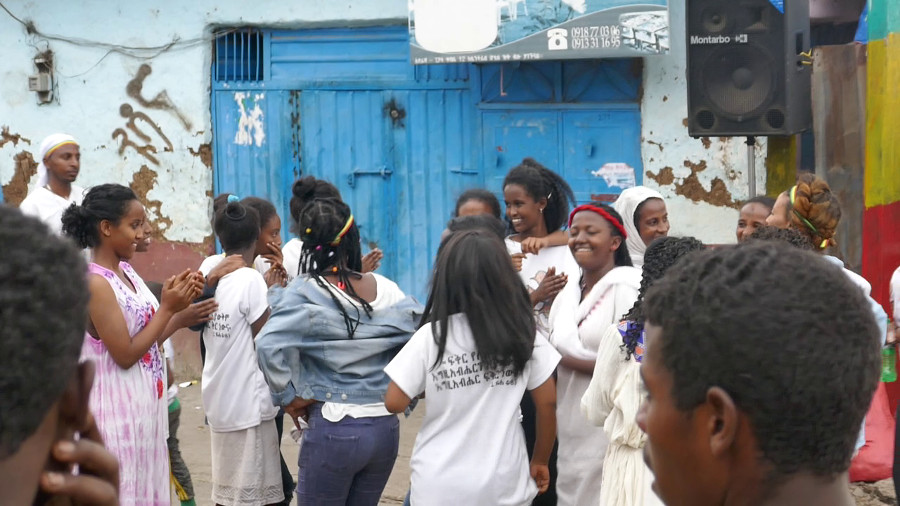 With the driver it goes the national road 3 to the north. At Worota we turn onto the highway towards Lalibela, because about 10 kilometers further there is the village of Awra Ambra.

It has a special character with the village. The founder, Zurma Nuro, has probably criticized the religious division in his homeland as a teenager and eventually moved around to promote a community committed to the principle of religiousness. Nevertheless, the community follows moral principles – working together, sharing equally, and supporting the people who need help.

A young man born in the community and supported by her studies reports of the story as a guide through the village: Nuro started a village in 1986 with 18 people in the area. The community slowly grew to over 60. However, they were hostility in the neighborhood and retreated to southern Ethiopia. There, many members died or emigrated. In the early 90s a new attempt in Amhara – and this time the community was able to consolidate and counts now over 500 people.

Concern for the community is impressive. Old people, especially those without a family, who take care of them, are cared for in a nursing home. And the community also cares for a kindergarten. It maintains a library and allows children and young people education up to the academic level.

The community has very little land to cultivate, which is why weaving was the main source of income.

The building was sponsored by the Dutch government.

The founder of the village is an impressive man, who has chosen a bright green knit hat as a trademark. We not only buy a blanket, but also leave a donation there.

After a good hour we continue to Gonder. There we descend to the Lodge Du Chateau, a kind of motel (the rooms all lead to the courtyard) with a roof terrace for breakfast.

There we meet Daniel and Christina from Spain, with whom we discuss travel experiences, languages ​​and a bit of politics from Puigedemont to Brexit in the evening.

For dinner, there is an impressive buffet in the restaurant „The four sisters“.