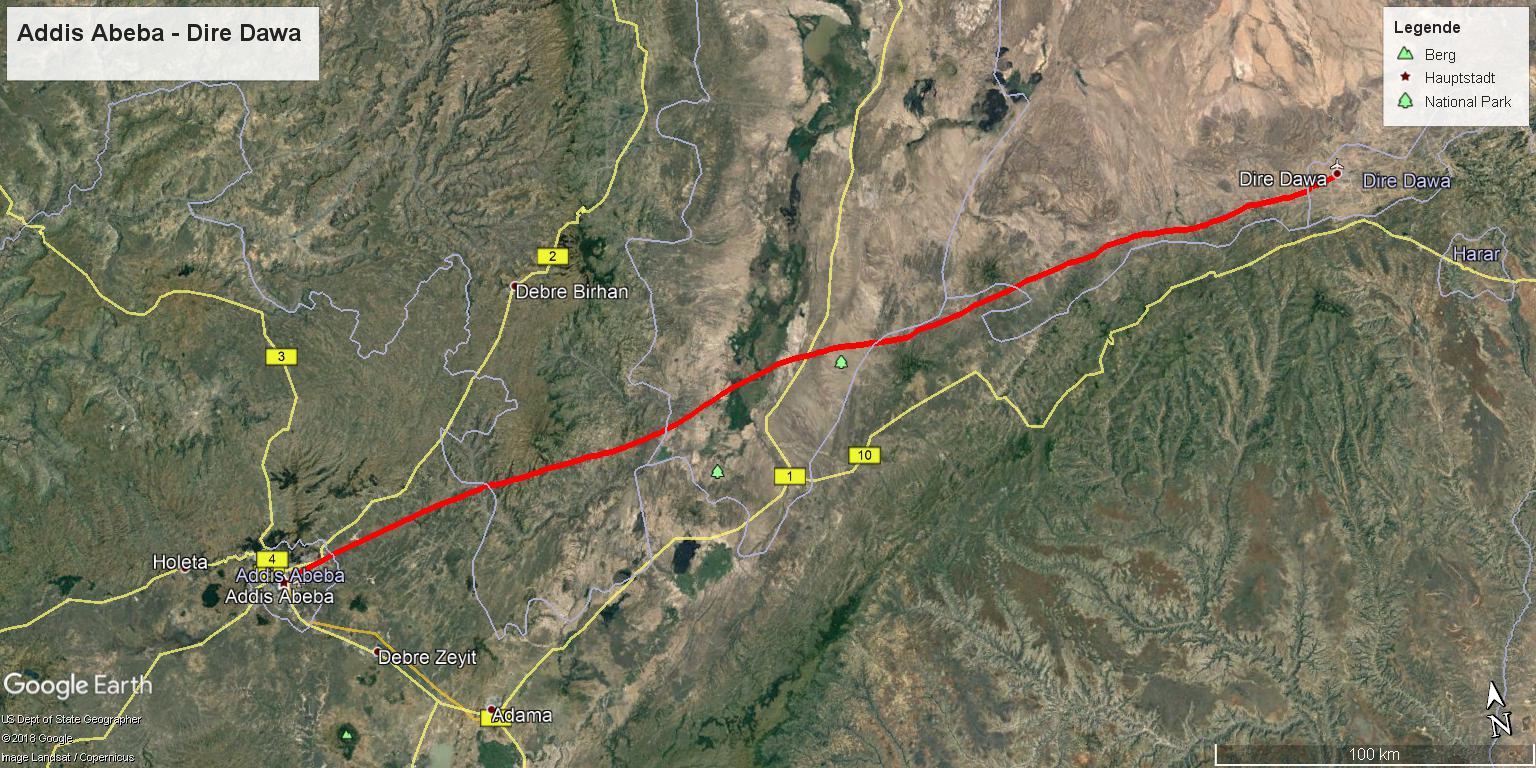 This morning it was time to pack again and to go to the airport.
Before, we were still looking for stamps in the expensive Capital Hotel and haggled with the manager of the Caravan Hotel for the room price for our two nights just before the return flight.

At the airport we still pay our ticket from Lalibela to Addis on 13 October. Unfortunately, we had to pay again in cash, the machine for credit card payment is broken …

But punctually at 14:00 the plane is already taking off towards Dire Dawa

On departure, we can see how Addis eats with countless new housing estates ever further into the countryside – including large single-family housing settlements, almost like in Widdersdorf – for the new middle class, Jan Blum had reported.

The airport in Dire Dawa, on the other hand, is a modest provincial airfield. With a driver, it goes through the city to the Ras Hotel.

Dire Dawa is quite new – it was created at the end of the 19th century. When, with the help of the French, the railway from Djibouti (then French Somaliland) to Addis was built, Harar, the ancient trading city, was originally to be included. But then you had to build right into the mountains – so it was decided to build a station farther west at the foot of the mountains, which served as the temporary end point of the line. There, a small settlement quickly formed – and today Dire Dawa is the fourth largest city in Ethiopia.

The original railway town is laid out like a checkerboard. It is located in the southeast of the dry river, which only carries water in the rainy season.

We check in at the „Ras Hotel“ (Ras means as much as head, summit, top): For 700 Birr, about 25 Euro we can spend a night on the hardest bed in Africa.

The efforts of the hotel employee to make the bed softer by using an additional blanket, remain unsuccessful. We decide, first to go to the market.

In the streets is really life, children play everywhere, women support each other when preparing food or doing handicrafts.
Only the men hang out in the streets to a great extent and chew khat, a soft – and also legal – drug. You chew on the leaves and this has a euphoric effect and also increases your pulse and blood pressure … and decreases your hunger.
Incidentally, khat is one of the main exports of Ethiopia – and here, in the east, is the main growing area …
We walk through the streets to the „old“ town and soon find the market with winding lanes between dozens of shop assistants (there are mostly women who offer here) . Dried peppers are the most offers.

There are fields of rubble around the market, with some pipes lying around, where goats enjoy themselves. 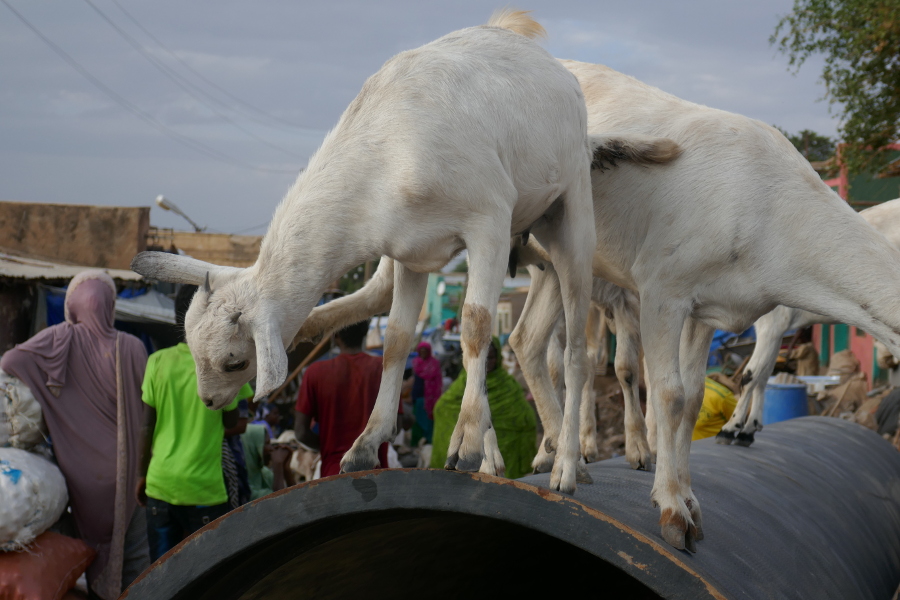 The women, surrounded by clean-piled fruits, vegetables and sometimes colorful, ground spices would be really a great motive – we have also asked one or the other, but all refuse, and secretly photographing is out of the question.

We are the sensation of the day anyway, especially for the kids. Everybody wants to touch a white man, shake hands or yell around us. Luckily, they are not overly intrusive – and parents move in quickly, even if they look curious and return our „selam“ – or even add a „how are you“.

We get at least one of the countless „Bajaj“ (pronounced Baschasch) in front of the camera – three – wheeled vehicles with covered but otherwise open seats behind the driver, who accellerates with a real motorcycle handlebar … 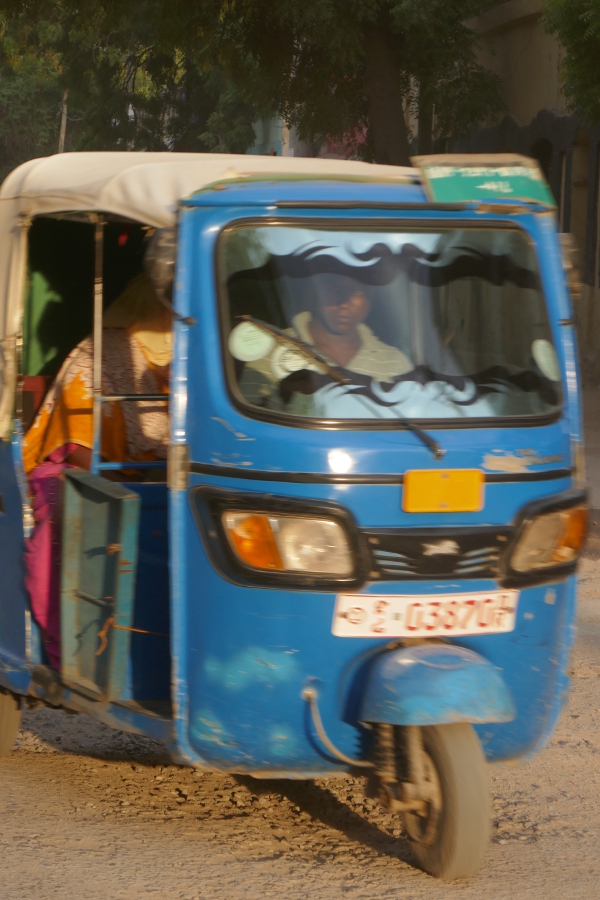 In the evening we go to Paradiso, a kind of Italian, the only restaurant in the city recommended at Lonely Planet. There are decent spaghetti – and after we have read to each other longer from the guidebooks, an Ethiopian at the next table stands up and asks in the best German: „Do you have much planned in Ethiopia?“ He is happy, after more than 20 years to speak German again – and he can do it very well. As a refugee, he came to Berlin in 1985. As with 15 years he was still a minor and had to go to a youth home. He learned to be a machinist in Berlin. In 1994, when the Mengistu regime crashed and the situation was a bit clearer, he returned to Ethiopia and, as he emphasizes, never regretted it.

Tomorrow we continue to Harar.