Breakfast in the community lodge again in the morning. Today we have only one donkey, but still two drivers. Each of them shoulders a small backpack.
The hike through the valley is interesting, but rather unspectacular in comparison to yesterday. At the side of the road we see for the first time a Teff field from very close. It is astonishing that here in Ethiopia so many crops are cultivated without gluten: Teff, a type of millet, sorghum, lentils. Incidentally, the Ethiopian government has banned the export of Teff because they fear that Western industrialized countries will discover Teff as a „superfood“ and take it away from the supply of its own people.

In Arbo Abre we meet our driver, who will take us to Hawzien. With Hannibal’s help, we have agreed that instead of visiting a rock church, we will drive to May Megelta.
There Wendelin, Chris and Kordula had filmed in 1991 for a short school television documentary. The protagonist was Haile, the 15-year-old son of a farmer, who had to look after the cows and sheep of the family.
Now we want to go to May Megelta to see what has changed since then. From Hawzien we drive to the intersection with the main road from Mekel to Adigrat. Then it goes a few miles to the north and we are in May Megelta. Wendelin does not recognize anything.
We stop at a small shop at the entrance. In front of it sits an old man. After a short debate, we bring out the PC and show parts of the film.

„Yeah, sure!“ – the old man knows the house and also the people in the video. Strained we follow him a small, unpaved road along. Finally, we climb through a construction site – and the house where Chris, Kordula and Wendelin filmed 27 years ago is right in front of us.

We let the old man proceed. He knocks. First, an old woman comes out, the mother of Haile, and then also the father.
Indeed! They remember everything. How it was filmed that we had left money for them back then. Wendelin has become much older, says the old man.
Yes, Haile then went to school. It would not have been enough for the secondary school. Now the only son here is the farmer, he cares for father and mother. He got married and has four children – we can welcome two and take a picture. Too bad – Haile is with his wife on the market. We will not meet him today. But the photo with father and mother is moving. Hannibal is also very excited. 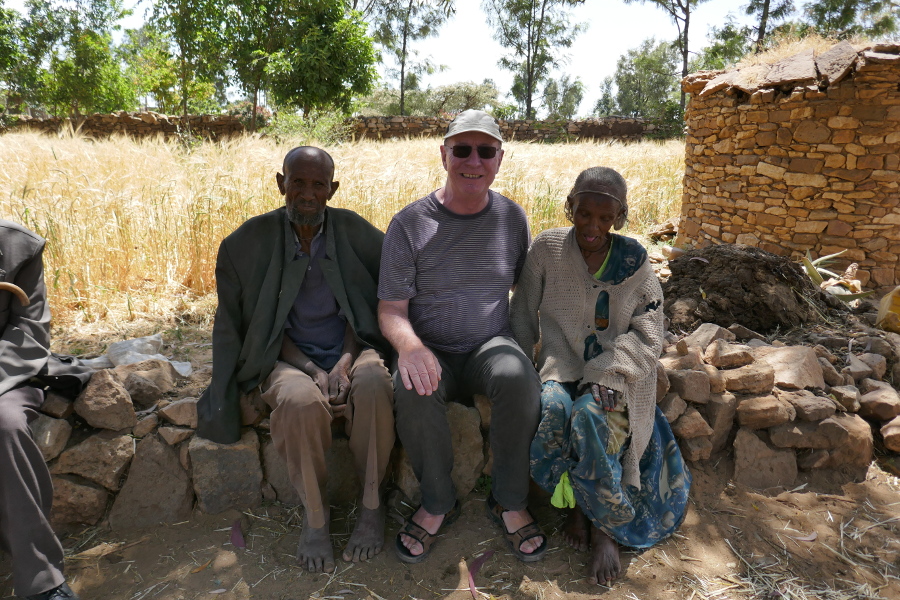 We show the film to the old people, Hailes father also recognizes the scenes that we shot in the house back then. Finally, we say goodbye, thank you – even with a small, welcome donation – and run back to the car.

Back in Hawzien we are quite flat. Especially Annette suffers from intestinal infection.
Incidentally, the Vision Hotel turns out to be a nuisance: an incentive event for employees of a Dutch NGO near Shire makes a noise. Supposedly should be at 10:30 shift. Until then at least 90 dBa.