At 6 o’clock the two mobile phones wake us up with the usual melody. A bit we can still lie down, then it goes – without large laundry – for breakfast. We pack up – and Corinna, with whom we have talked shop at breakfast a bit, suddenly disappeared. The leader has probably pushed for departure, because she still wants to take a bus to Aksum today.
We take more time. Gebre, our local guide, is already here. He went back the whole 12 kilometers last night and the same way again this morning …
We move on. It is now along the edge of the demolition, again and again with great views of the mountains and the valley.

Gebre likes to sing. Hannibal and he perform a real dance, the song about the „revolutionary Tigrai“. Hannibal asks about German songs and we teach him the first three lines of „Walking is the miller’s pleasure“. At the end he sings that quite well. In return, Wendelin learns the changeover part of a love song. However, he always has to sing only „Haile-mine“. Of course in the right place! 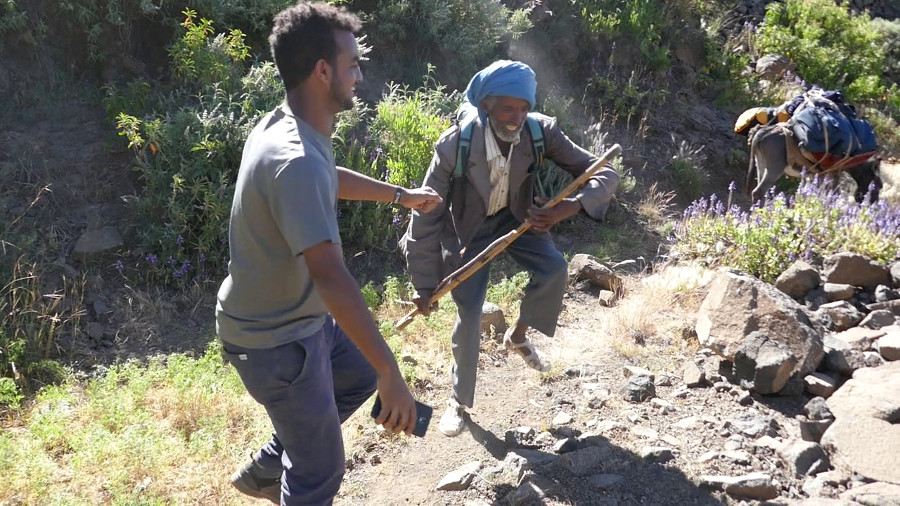 It’s a lot of fun to travel with them over the mountains and soon we reach the steep descent from the high plateau. 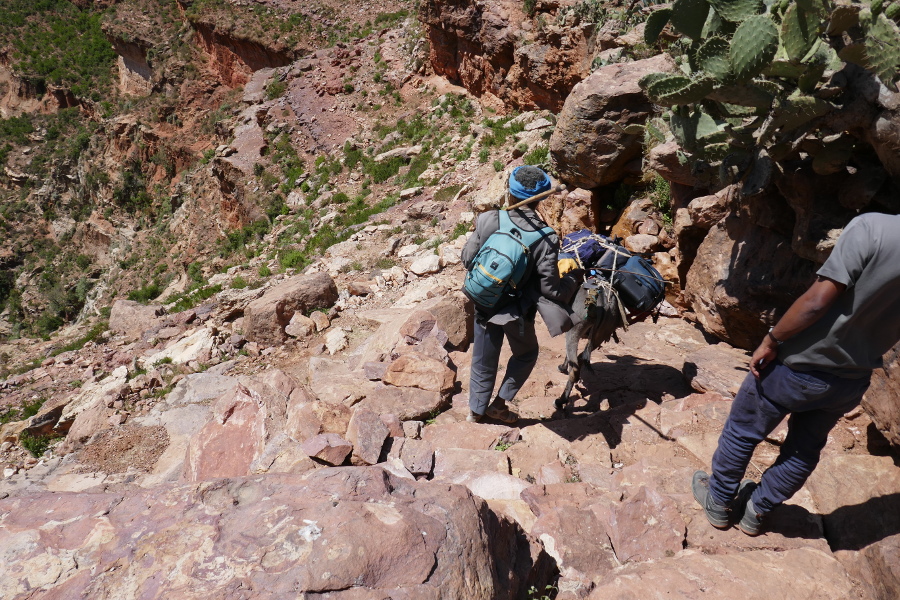 At the foot of the mighty, reddish sandstone cliff the donkey drivers of the second village await us, to which we now pull. This time, two drivers came with two donkeys. Our things are repackaged, Wendelin now also gives his backpack, which easily fits the back of the second long ear.
Now it goes at the foot of the mountains through the plain with their fields and deep cuts of rivers, which, of course, only lead water in the rainy season.

After a few kilometers the local guides asked to hurry. In a nearby community, that we have to pass, is a funeral. And to funerals, Hannibal explains, all members of the congregation, often from neighboring communities, and friends and relatives from far away always come. 1800 to 2000 people at a funeral are not rare. And so we are constantly striving for groups of people who want to attend the funeral. The son of the deceased had horses used at weddings and funerals. And so his colleagues come from all over with beautifully decorated animals.

In our direction, a group of schoolgirls pulls out of the school home. First they are a bit shy, then they move along with Annette, each one has to answer „what’s your name?“ And use a little bit of learned English.
At some point it is called „Ciao!“ (The word adopted by the Italians in Tigrinja) – because we now climb again vigorously, before we reach our second rural accommodation, the „Guagot Community Lodge“. 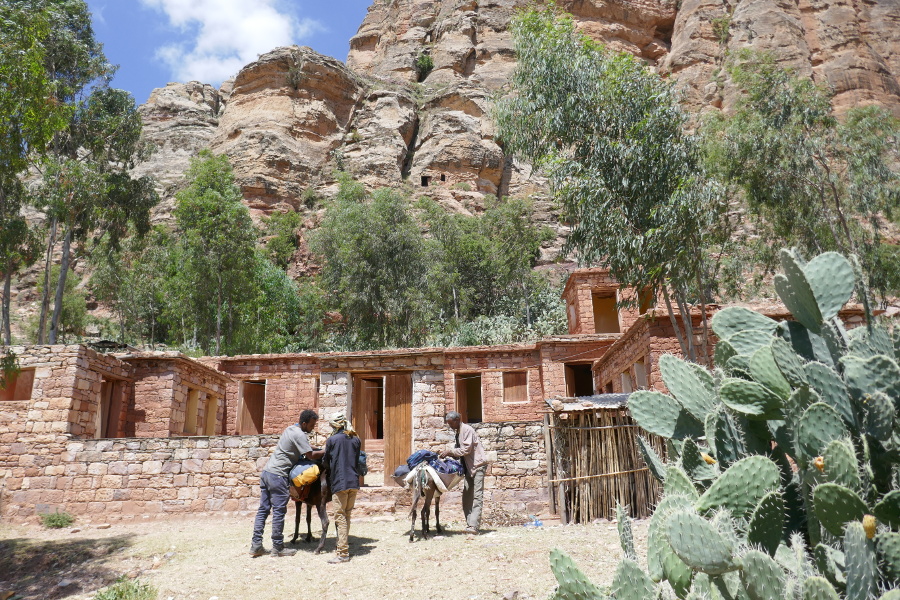 After lunch, this time also for us an Injera with tomato sauce in the variant „spicy“ with Berbere and light, namely just without this spice and spinach and chickpea puree, resting is announced.
Later, the women and the „host father“ come back from the funeral. Now there is an original Ethiopian coffee ceremony: grass is spread on the table and on the floor, as a sign of hospitality. Provided are a charcoal stove, a mortar and the typical round-bottomed coffee pot, which stands on an annular base only.
The coffee ceremony begins with the roasting of the beans. In a tin box, without a lid but with a handle soldered to it, the lady waves the coffee over the charcoal fire. Finally, everyone is allowed to sniff the aroma. Then she puts the roasted coffee in the mortar, crushes the beans and fills them in the coffee pot. Now the coffee is boiled and finally served. The classic ceremony knows three rounds with decreasing strength of the coffee. We have two. Hannibal tells a nice story about the origin of the rounds.. 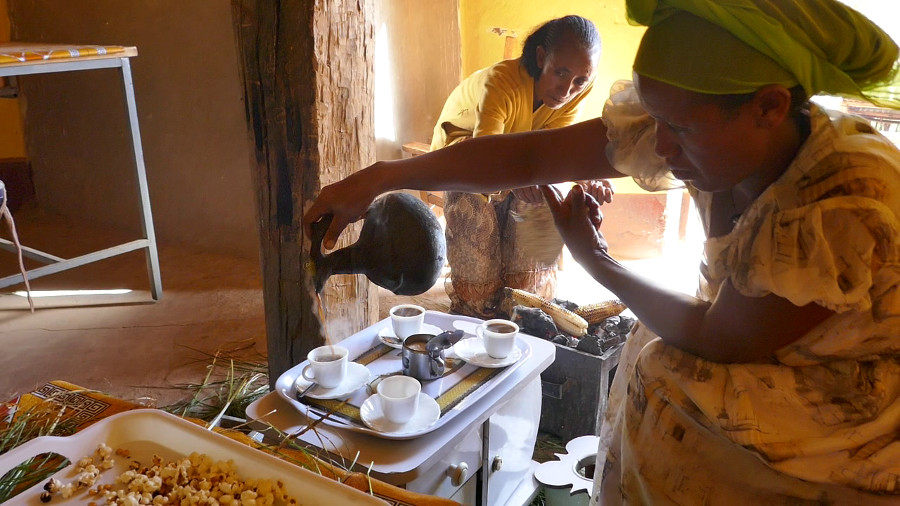 Afterwards we will review together the video with the film about Haile, the shepherd boy. We want to go back to May Megelta, the village where Wendelin filmed with Chris and Kordula. But where exactly is May Megelta? In the maps of Google and also in the Open Street Map on Wendelin’s GPS device, it is not to be found.
Hannibal immediately recognizes where the location is: directly behind the mountain, which extends east of the inn. After May Megelta there are no 12 km linear distance!
We will drive to Hawzien tomorrow. From there we should visit a church. The plan is now: We renounce the church and drive to May Megelta. 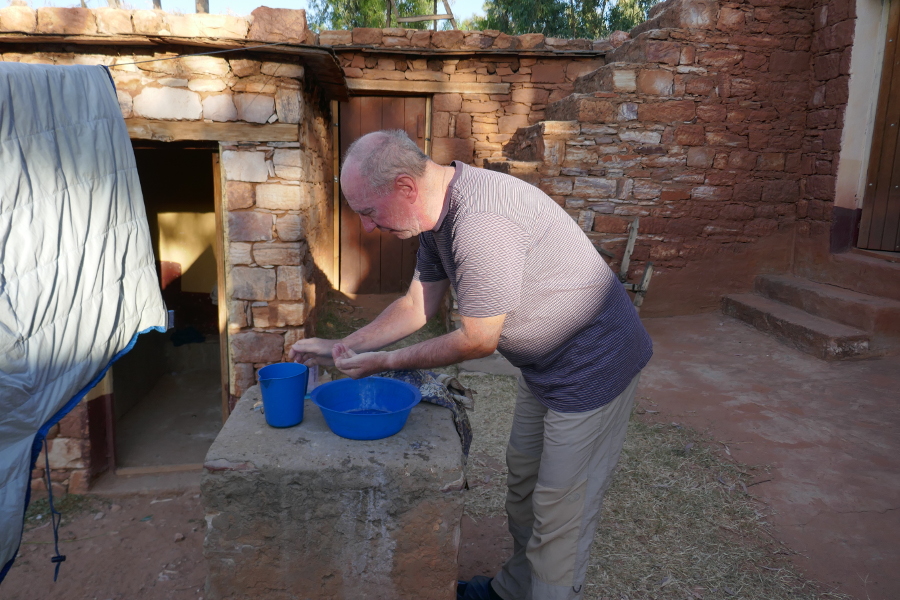