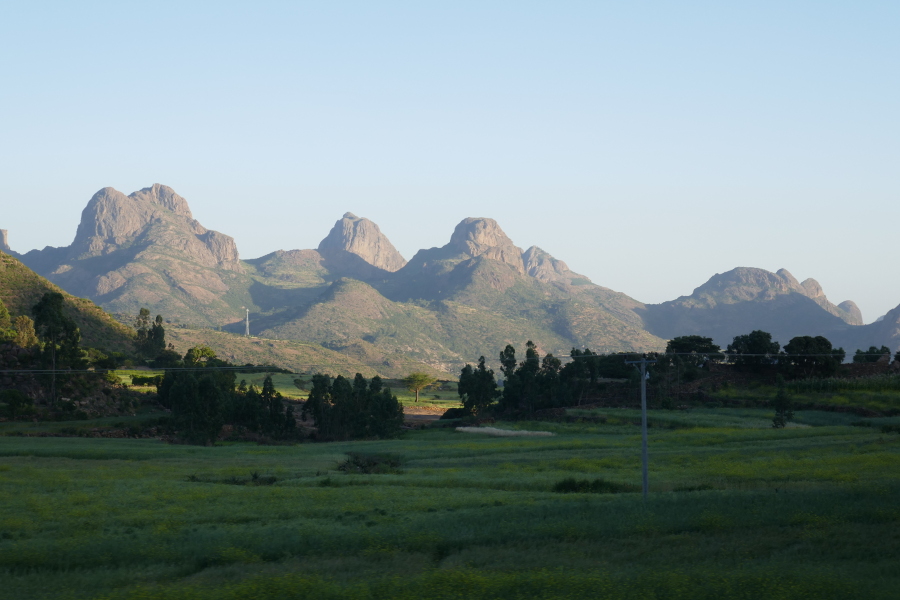 The departure announced for 6 am „sharp“ is even 10 minutes earlier – and that’s only because we do not rush. The driver announces further passengers – he tries to find passengers in virtually every major town. This is not so easy here. And he is probably a bit expensive – a man leaves after unsuccessful price negotiations, the minibus again. The passengers marvel a bit about the „Ferenjis“ on board – but it never gets really tight. 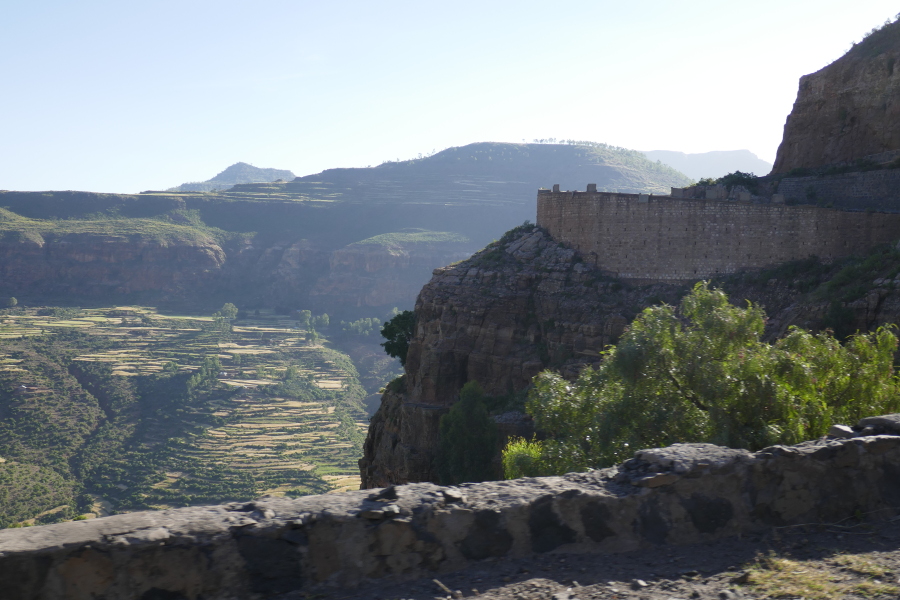 But it is the environment that makes it all the better. The mountains tower high, dissolve with fertile valleys. On the fields weighed wheat, barley and tef fields.
And it goes on the excellent road quite fast – at half past eight the minibus delivers us already in front of the hotel „Eve“. We did not announce ourselves until lunchtime! We do not mind waiting – we use the time to continue writing the blog and get an omelette sandwich for breakfast. An agent from Tesfa-Tours, on whom we booked the three-day trekking tour, appears briefly and controls the storage of our luggage.
Finally comes Hannibal, our guide for the next days. He speaks really good English. 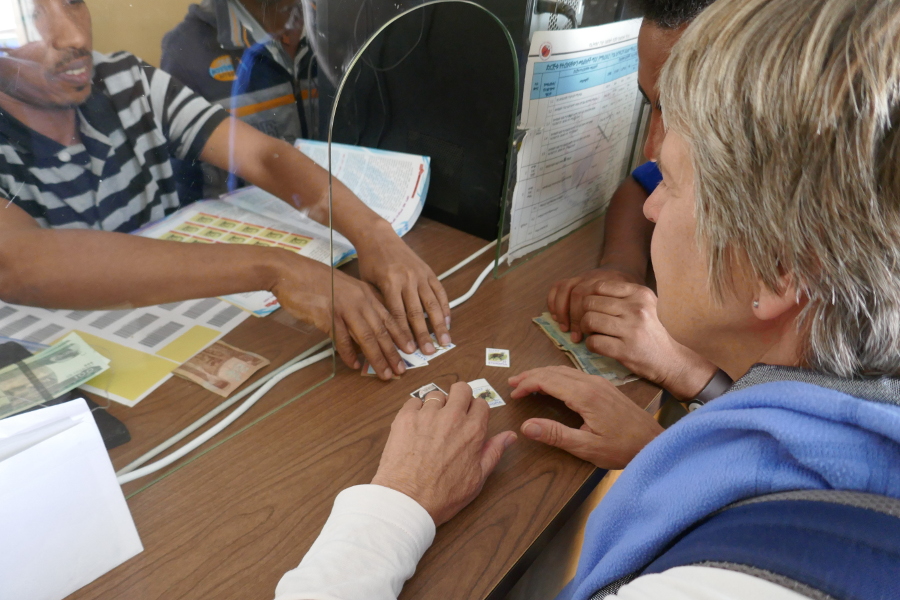 First, it goes to the post office. There are more postcards, this time with a barcode sticker, on the way to Germany. And we buy, perhaps for our friend Boris, a selection of beautiful Ethiopian stamps. Mint!
Unfortunately, we have to go to a pharmacy again, because Annette has to fight more with the intestine again. 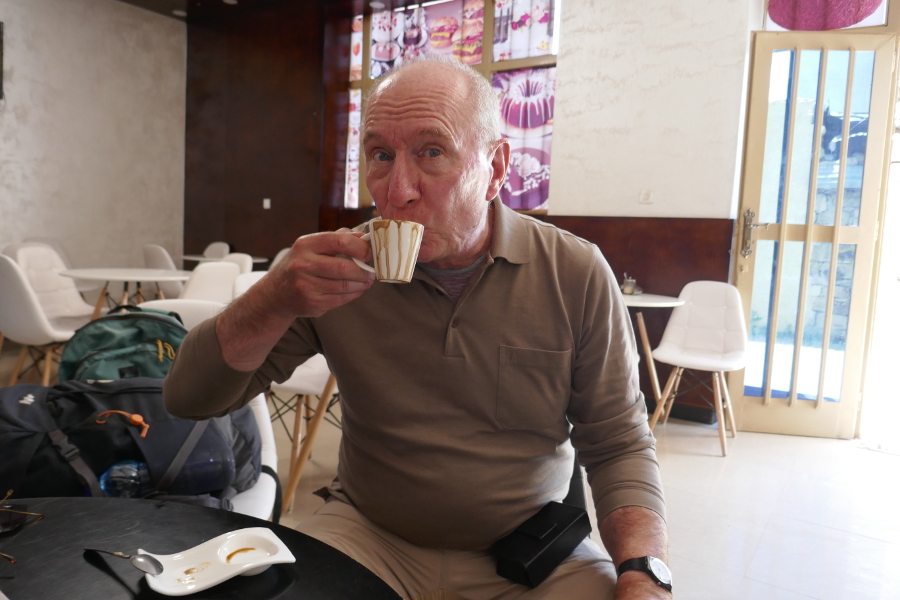 The lunch in a traditional Ethiopian restaurant is already included and then we drive bag and bag in a Bajaj a bit south out of the city.
There is already a donkey with the local donkey guide waiting for us. The donkey has been tied to two steel tubs made from old oil barrels. In it, our luggage is stowed and then they tie the whole construction with ropes on the donkey.

The donkey and his master, a 62-year-old gaunt former Dergh soldier, a real jester, are the fastest on the subsequent ascent. The path meanders up the hillside and there are always interesting views of the city, which Wendelin experienced on his first visit in 1991 as a small collection of houses with a huge refugee camp. Adigrat is now a real city with around 75,000 inhabitants.
Hannibal lives here since the summer of 1991. He was born in the same year that we were shooting in Adigrat. He is fascinated by the reports of that time and for his part recounts a new view of Ethiopian politics. 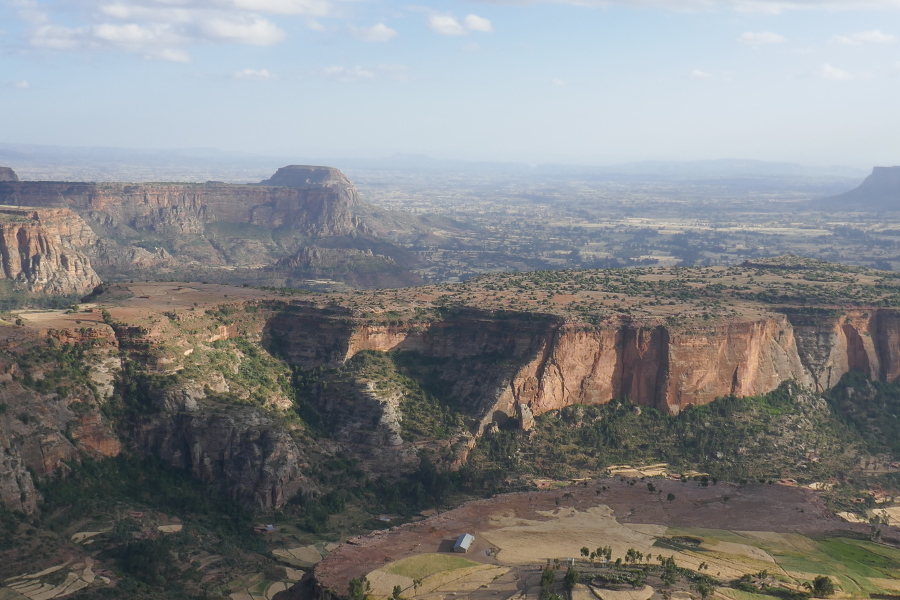 Soon after long discussions about the role of the Tigraians in Ethiopia, the importance of Meles Zenawi and the strengths and weaknesses of the TPLF, we have arrived on the high plateau. Now the view is clear on the sandstone mountains of Adigrat. Large table mountains surround canyon-like valley incisions. Everywhere is terraced, everywhere is grown. The steep crashes of the mountains give the whole a wild romance. 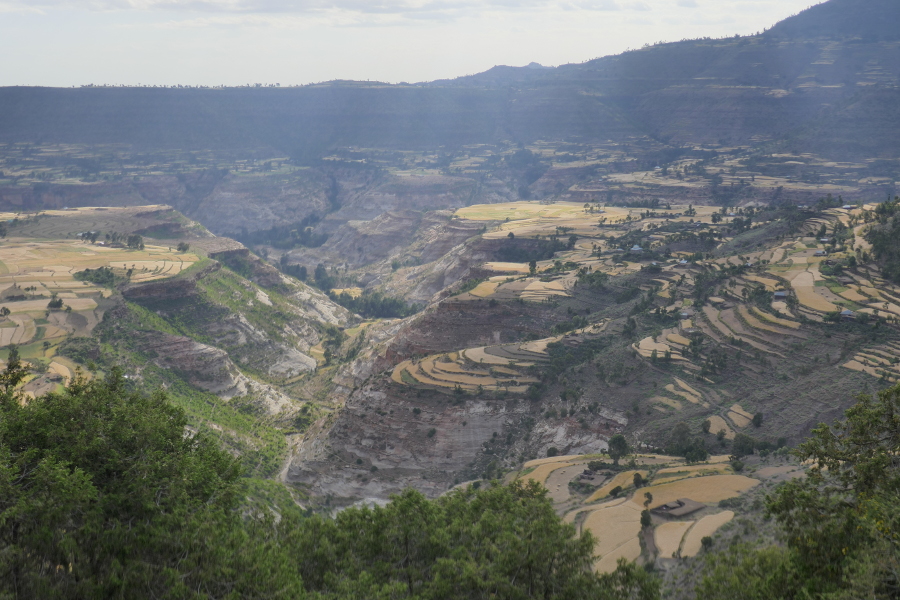 After a total of 12 kilometers, that was for some of us due to the altitude (in the end we are at over 3000 meters) quit a hard approach, we reach the „Enaf Community Lodge“.
The building feels like traditional farmhouses. Three bedrooms for the guests, a room for the guard, one for the guides, a dining room marked as a „restaurant“, the kitchen, a strangely constructed wooden toilet and a shower room with a canister and a faucet ,
There are a total of six such houses run by Mark Chapman, the founder and owner of Tesfa Tours, together with their respective communities. There is a responsible person, two women take care of the food and the cleaning work (there is not much with equal rights). Repairs carry the community, for larger investments, Mark Chapman is probably looking for a financing. 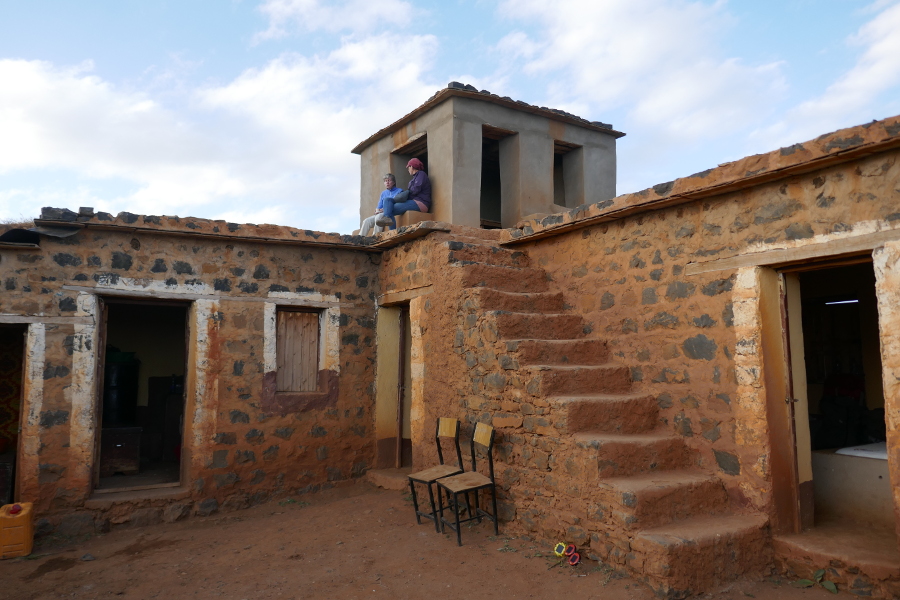 Of the income from the rental go, it is assured, 55% to the respective community. She advises on the use of revenue every year and has already funded several classrooms for the school from it.
First we stretch our legs – and after a long time we can talk to a traveler in German again. Corinna from Freiburg has arrived before us and enjoys the afternoon sun in front of the roof structure, which crowns the „Lodge“. She is in „Sabatikal“ and has already traveled to Central Asia and Madagascar.
Later, we eat together. Rice was prepared for us „Ferenjis“, Hannibal and his colleague, the leader of Corinna, stick to Injera.
The night seems to be getting cold. But in our sleeping bags it gets warm after a while. And during the nightly visit of the toilet we can see an overwhelming starry sky. Too bad that we can not take pictures!