First we have to report about our accommodation. We booked them at the last minute on Booking.com, after we came to the conclusion that the „Abeda Castle Hotel“ where Wendelin lived with Chris and Kordula at that time, is not worth the money. Yesterday, we photographed the terrace, where the three of them interviewed Rupert Neudeck.

The „Asimba Guesthouse“ on the road to the airport is a real „oasis“. Chris, a former civil engineer from the UK, runs it with his Ethiopian wife Saba.
He built it from Dubai, where he worked. A solid construction, the best sanitary installation in a long time. And really nice hosts.

He built it from Dubai, where he worked. A solid construction, the best sanitary installation in a long time. And really nice hosts.

Incidentally, we were in the nice Italian restaurant „Karibu Kitchen“ yesterday evening. A decent pizza, Annette had noodles.

Yesterday we thought about flying to Lalibela. Of course, it would be nice to do the entire track that the film crew traveled with Charles, the driver and Solomon, the EPRDF guide. And maybe take a look at the inn in Korem, where Wendelin had to go to the bathroom at night, tormented by diarrhea …

But the chances of finding the places at all seem very small because of the enormous changes. And the ride is quite a ordeal: 9 hours.

Chris, our landlord, still advises to ask Ethiopian Tours & Tourist (ETT).
Of course we have already reserved the flight and have to pay it until the afternoon.
There was only one more flight that required an overnight stay in Addis. There are very few flights between provincial towns – for example between Lalibela and Gonder, as our flight back from Lalibela on Saturday will be handled with a stopover in Gonder. From Mak’ele we must definitely first to Addis, then the next morning to Lalibela. We have already booked a hotel for the night in Addis.

Nevertheless, we ask ETT what should cost a trip to Lalibela. $ 200 – that’s the price of a car, up to six people can – but the other four are not yet found…

We stay with the flight, especially as the ride seems rather arduous and not without danger. On the drive from Hawzien to Mek’ele, we narrowly escaped an accident when one truck overtook another – and when it moved in back to the right lane, it almost fell on us.

So we walk through Mek’ele to the Ethiopian Airlines office. After a short bureaucracy (a cashier counts and counts) our flight is confirmed.

After a coffee next to the office, in the „Business District“ of Mek’ele we go through the neighborhood „Kebele 16“ in search of a qualified pharmacy. This time, Wendelin needs an ointment for insect bites. It was an insect that you do not usually like to have in bed …

The Kebele 16 is the student quarter of Mek’ele. One café joins the other, everybody has put the small plastic chairs with small tables on the street. And of course every second customer has a cell phone on the ear or toys with it.

Mek’ele we like very much. The city looks much tidier than Addis. Many side roads are cobbeled. This should all go back to an initiative by GIZ, the German Development Agency. If it’s true – Chapeau!

There are traffic lights that even have an effect, now and then someone stops at the numerous pedestrian crossings.
And the people are extremely friendly. A group of women are sitting on the street as we pass – and laughs badly. Annette makes contact – and then a picture is taken of the whole group.

A late lunch in the restaurant Yordanos – not necessarily recommended spaghetti …

Back to our accommodation. Due to the occupancy of our room by other people on the second day, we had to move to a more expensive, but still unequally more beautiful second room in the Asimba. We had a rest there.
At the end of the day we drive with a Bajaj to the inn Geza Gerlase, which offers next to Injera with loads of roasted meat also performances of local music and dance. 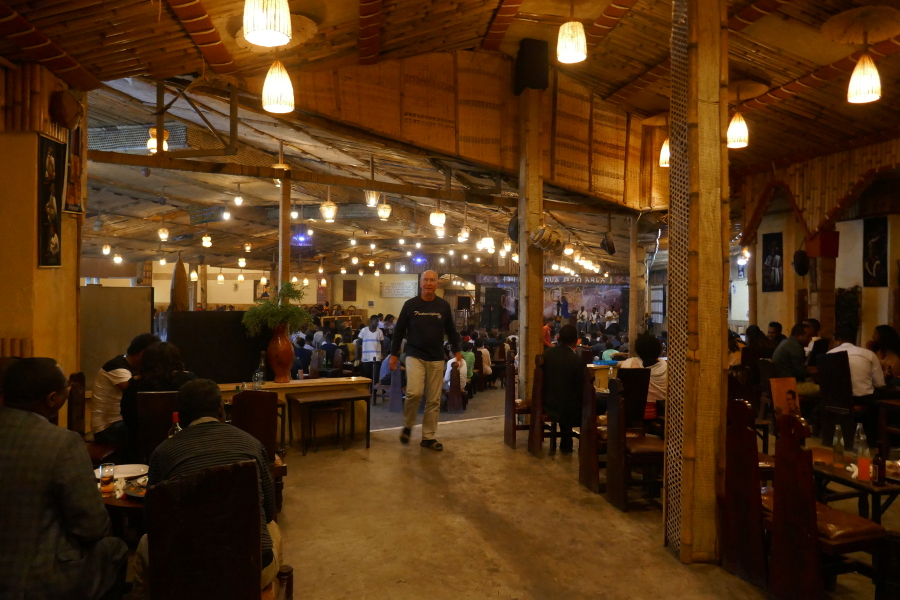 Anyway, Mek’ele is – according to Wendelin – unrecognizable compared to 1991. We take another picture from the terrace of the Castle Hotel: